Inflation is the rate at which the price of goods and services increase in an economy, leading to overall decreases in purchasing power among consumers. It’s important to understand how much inflation could impact you, since it can seriously affect your savings and financial decisions (especially if you’re retired or living off fixed income). Use this guide to learn about currency inflation, what’s caused it recently, and what to expect from it this year and next year.

What Is Causing Today’s Inflation? 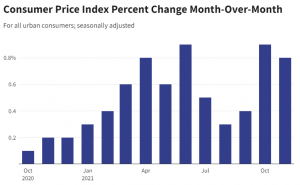 COVID-19 is primarily blamed for rising prices among economists. With lockdown measures ending, people were eager to spend some of the money they hadn’t used while locked up at home, creating pent-up demand for products at a time when supply chains were strained.

Because of the pandemic, lots of items couldn’t be produced because they had limited workers, and companies either were trying to catch up on what they lost or just waiting to see how long the virus would last. What this virus mainly had an effect on was demand. In short, it is this concoction of limited supply and high demand that is prompting prices to increase.

Another factor that may be driving inflation is all of our money being printed in an effort to prevent another financial crisis like we had with COVID-19. Companies are making a ton of money right now, and some are just taking their extra cash reserves and buying gold or other precious metals. With more people doing that, it drives up demand for gold/silver/etc.

Which Prices Are Rising Highest?

COVID-19 impacted virtually every industry and drove up the prices for things such as gas, bread, and bacon. When in the case of monthly inflation, the BLS not only publishes the figures but also breaks down price changes by category. Among the highest price changes in October were for fuel, car rentals, gas utilities, and used cars and trucks.

The largest year-over-year drops in prices were reported for airline fares, apparel, electronic goods, and household furnishings. While consumers might not see a drop in prices for such goods and services as consumer electronics next year, they might benefit from lower costs for airfare. That’s because airlines have come under pressure from market conditions (including high fuel costs) in recent years. 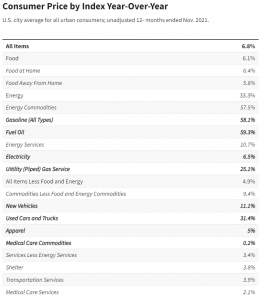 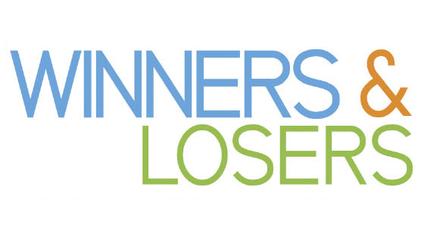 One of the hottest debates in economics is about whether or not current price increases will continue, or are just temporary. A minority of people have different opinions, believing that Americans and most of the world’s other largest economies will need to change and adapt to what’s coming.

Yes
A popular theory says that current price increases are too concentrated and will diminish as supply chain bottlenecks clear up and the urges to buy these items fade following the crackdown. In the past, high inflation has faded after a handful of goods and services drive the price increase. Today’s pent-up demand might eventually wane since households have used up their accumulated savings, and the government is no longer giving out handouts. Citi is one of many major investment banks to express confidence that today’s inflation is temporary. In a research note published earlier in November, the bank’s strategists predicted that inflation would ease after February 2022 as supply catches up to demand and the Fed makes good progress on its plan to reduce bond purchases.

No
Additionally, there are valid reasons to believe that today’s strong inflation will not abate anytime soon. There is some evidence that the argument that price increases are limited to pandemic-affected industries is ebbing a bit as other isolated, slower-moving categories such as rent join the trend.
Growing job vacancies and difficulty filling positions may cause wages to rise as a result of a weak labor market. Large salaries may lead to more spending by recipients and may tempt businesses to increase prices to recoup these costs. We may find ourselves much worse off this time next year in light of these observations and the fact that it may take longer than expected to resolve the supply chain bottlenecks caused by COVID-19. 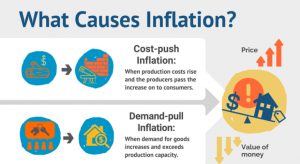 General inflation, which is the rise of prices for goods and services, can be caused by many things. A popular reason for it is when there is too much money available to be spent on too few goods and services. Another reason is an increase in demand. If people start buying a product because they like it, or they think it’s valuable, then demand rises. On top of that, if people believe a product will be worth more in future (like gold), then demand rises too.

Another reason for inflation is when people expect prices will rise. If they believe that, they’ll buy something right away because they think it will be more expensive in future. But when more people want a product than there are goods to sell, demand outstrips supply. To cope with that imbalance, sellers increase their prices so they can make as much profit as possible while stocks last. That’s why higher demand creates inflation – sellers charge more because of an increase in sales.

What Is the Most Common Measure of Inflation?

The most accurate measure of inflation is the Consumer Price Index, which calculates the average change in prices paid by consumers for a basket of goods and services. The CPI is used to measure the rate of inflation, or the change in prices from one period to another. Price inflation means that things now cost more than they did one year ago.

The CPI is calculated by tracking changes in prices of a sample of goods and services, including transportation, food, housing, medical care and education. The cost of these items is compared over time. If one year’s price level is higher than it was one year ago, inflation has occurred. The U.S. Bureau of Labor Statistics publishes consumer price data monthly based on surveys of thousands of retail outlets across many geographical areas in all 50 states.

What Is the Predicted Inflation Rate for 2022?

Opinions differ on how prices will go. Depending on who you ask, some believe they will only increase over the course of the next two years. Economists disagree about how low inflation will dip–some believe it will dip to near the Federal Reserve’s target rate of 2%, while others think it will remain elevated until the Fed’s historically low interest rates are hiked more aggressively.

A number of factors influence inflation. These include not only changes in demand and supply, but also broader economic conditions such as employment, interest rates, currency exchange rates and oil prices. Economic indicators like unemployment numbers are taken into account by economists because they help predict changes in inflation.